I am been swamped and totally remiss in blogging lately. Between work and the many home improvement projects, I’ve really had no time to write or even think about writing. Once again, my queue continues to grow and I have no time. However, as a quick and dirty post, I want to take this time to mention some upcoming movies that will be in the theaters this month, September 2018 in both the U.S and Canada. Take a peek! 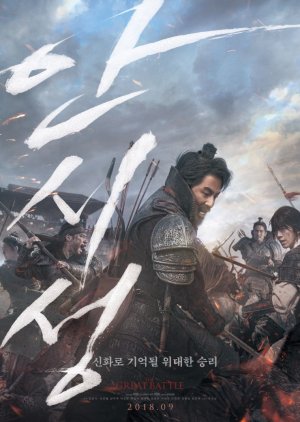 The return of Jo In Sung who’s last movie was The King (still be reviewed and seen), returns in the lead as Yang Man Chun in what will be a cinematography treat in epic proportions, the story of the Siege of Ansi, where Goguryeo forces held their fortress against 500,000 invading Tang soldiers in a battle that raged for eighty-eight days.

Thoughts
This looks really good! Not only do we get to see Jo In Sung in a historical again but the supporting cast is epic! All of you history buffs and proclaimed Jo In Sung fans, this looks worthwhile seeing in the theater to me!

Me and my love for the military plots, put this movie, Golden Job onto my radar. With the following synopsis, this is a win in my book: A group of former mercenaries reunite to plan an epic heist: boosting a truck full of medicine held by a foreign intelligence agency to supply a refugee camp in need. But when they find the truck is actually filled with stolen gold, the band of brothers realize they’ve been double-crossed by one of their own – and putting the situation right will be all out war.

Thoughts
I haven’t watched Ekin Cheng in a movie since Full Strike. I definitely like Chinese action movies of this genre because as my mother says “They put their foot into it” So I expect a lot of things that go “BOOM” and lots of action in the mix. Jordan Chan is coming in after the completion of OCTB which I had a love/hate relationship with; but not because of the acting. Plus with Michael Tse in the cast, expect some serious action and stunts (I highly recommend 2016 Three if you haven’t seen it).

Make sure you come back and comment if you get to see either of these films in the theaters. I think both will be worth it!