WOW! 2 posts in the same month! I’m on a roll!! Korean rap hit the states with a vengeance last fall, 2017 and this Spring. Both concerts, I was fortunate to attend at the Howard Theater in Washington, DC. The theater is actually nice! My only complaint is when you reach a certain age, standing room only venues are NOT my favorites; however, one good thing that can help with the constant standing is if the music is right and the crowd is excited. 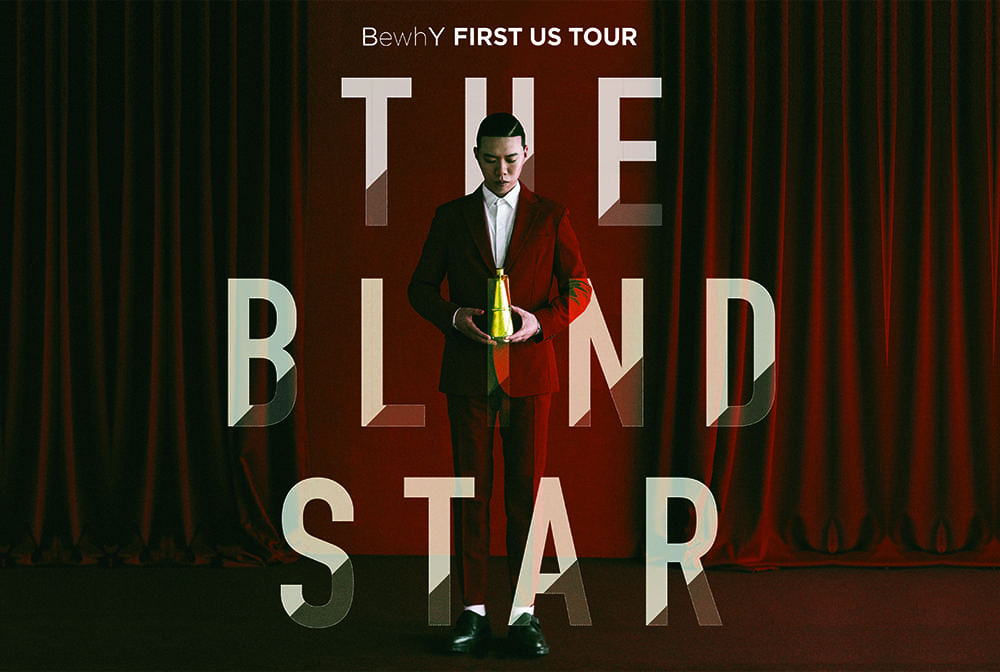 The Blind Side tour of BewhY hit 6 cities from Los Angeles to New York. I was surprised that a tour leg included the DC area and I wanted to end my concert going year with K-rap. I really do like rap. I’m an old school rap lover whereby they told a story not necessarily just about the streets but also about life. When rap began gangster, my love affinity for it pretty much disappeared; however, as I became familiar with K-rap (thanks to my older daughter who is a BIG fan), I started liking it more and more.

BewhY’s concert by the time he got to Washington, DC was near the end. I was rather surprised by the turnout. I admit that I had heard about him and his music only from my daughter but I made sure the months prior that I listened to his music so that I could get an appreciation for it as well as mentally collect my favorites so I can listen and enjoy. BewhY’s concert was pretty good. The crowd was medium size as almost 3/4 of the floor area was filled and all of the areas near the bar was semi-packed with people. It seems that more people had heard of him then I realized. And that became obvious by the enthusiasm of the crowd as small as it was.

His songs of 9ucci Bank, In Trinity, Shalom, and Dejavu have all become favorites of mine and were obvious favorites of the crowd. The rhythm and beat of all these raps are very catchy. In no time you learn to sing along with the chorus! Me and my concert buddy for 2017, Jaeswoon had a pretty good time; however, it was so freaking cold in there! It was like the Arctic wind was blowing in the theater, it was so cold. Also, it does gets tiresome standing after awhile so as soon as we could, we sat down, tried to stay warm and finished out the show.

Somewhere I still have my pictures and videos. As soon as I find them, I’ll post a few. As this concert was last Fall, I’ve seemed to have misplaced them all (big fan!). Overall, the show was worth the price of admission. Helped that the theater has valet parking too! You have no idea how hard it is to park in DC at night; any night! 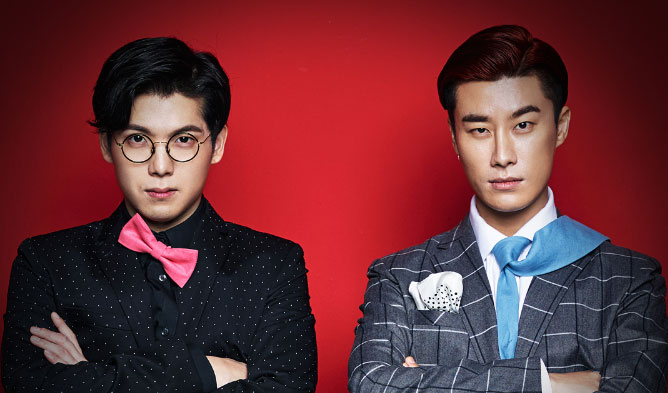 Now, this April 2018 concert with Mad Clown and San E was a big surprise! They were also visiting a lot more cities. We can assume that this might be the big tour before the Military Service break that all Korean males are required to serve. Unfortunately, none of my usual concert buddies were available; however, as my daughter is the one who turned me on the K-Rap in the first place, I didn’t have to twist any arms to get her to go with me to see these two. 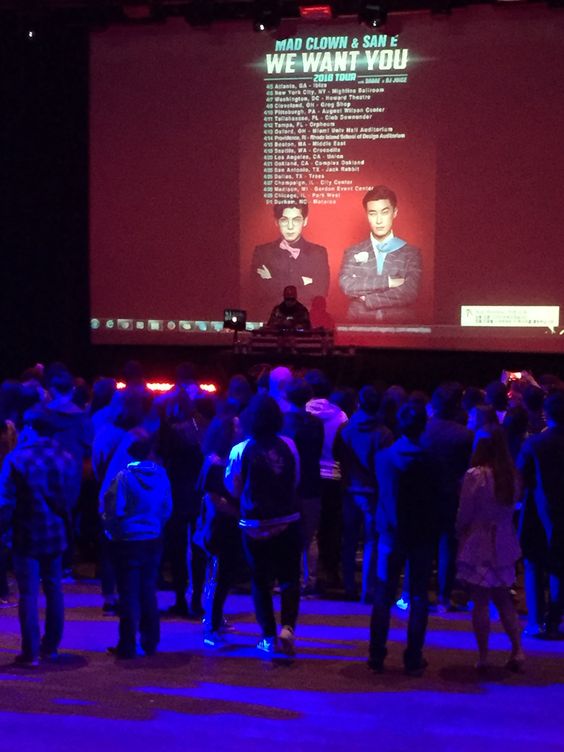 We were pretty bummed at how thin the crowd was. For a Saturday night and with it being in April and not the dead of winter, I was expecting to see more people than had attended. The crowd was just 1/3 of the BewhY concert last Fall but I have to say that the enthusiasm might have been a lot BIGGER!! 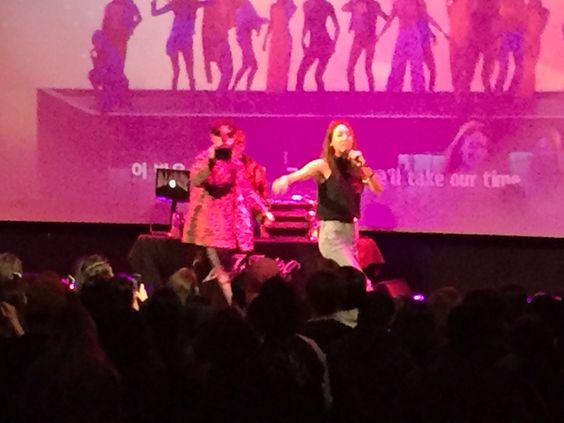 The concert started on time with the accompanying DJ Juice and featured Sobae, a fairly new female solo artist (or she is simply new to me). I admit that I had never heard of her, ever. She sang her first and latest hit, Homegirls with the video showing on the screen. I found it to be very catchy. Here’s the video: 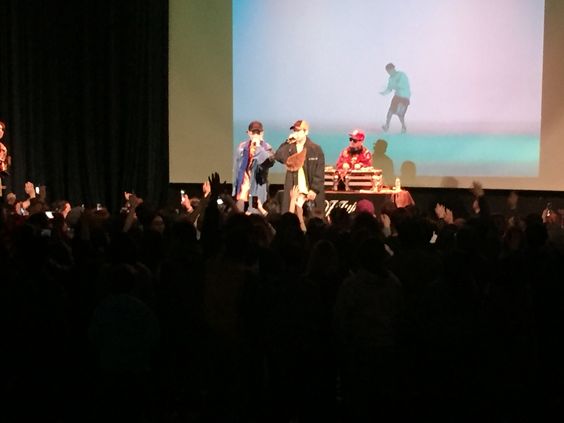 The rest of the evening was all about my boys, Mad Clown and San E. They were literally take turns or sing together. San E is a character! He is so personable and outgoing! He was trying to garner all the love from the audience because he’s still single. He was constantly kidding Mad Clown about his off the market status as a married man and new father, it seems. Besides making the audience laugh, he just seemed like a nice guy. Mad Clown is definitely the shy guy of the group. You can tell that just by him talking. He spoke mostly in Korean as well did DJ Juice while San E and Sobae were very proficient in English. 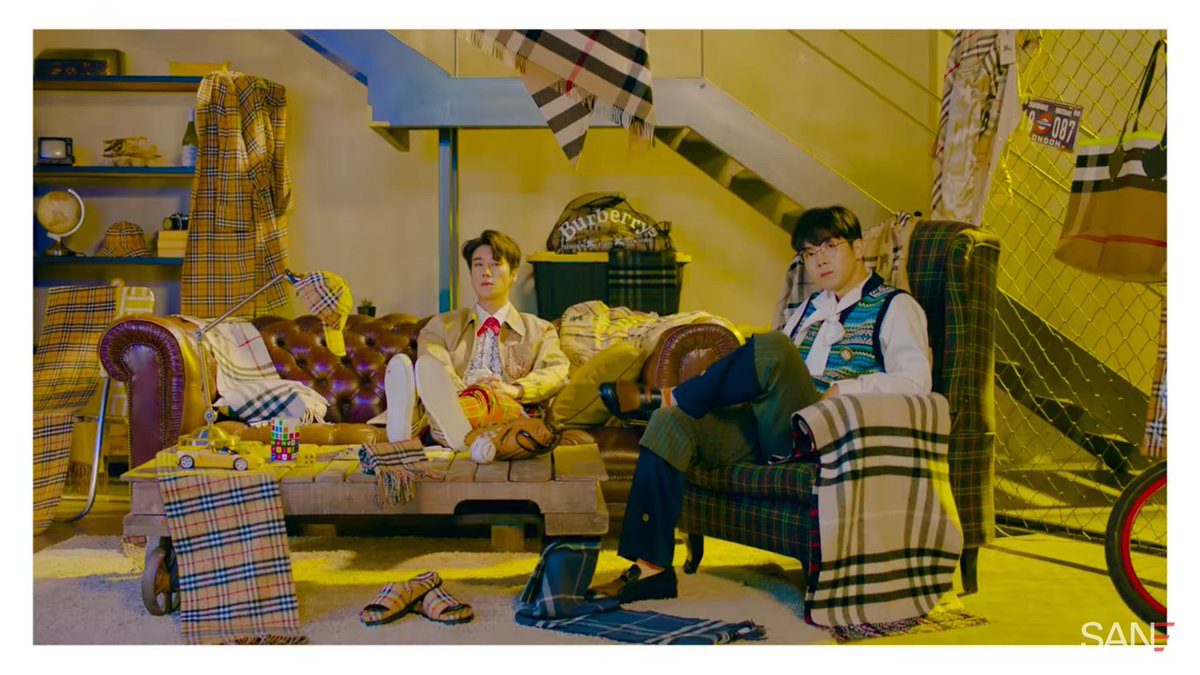 We didn’t take a lot of pictures. I was also disappointed that they weren’t selling any memorabilia. The fellas did give out copies of their new CD to some of the more faithful attendees that were standing nearer the stage. There was also one guy that San E spoke about that he had met at the Meet & Greet which was held earlier. In retelling the story, the guy in question wanted to let them know how much he loved them and his music. So, San E, being San E autographed one of his hats and gave the hat expressly to the guy. What a memory! And so San E!

I went to the concert with my “must rap” list and was very surprised that they did most of them. Songs like San E’s I am Me, Counselor, Lost in Myself (Sobae sang female part), What If, and Mad Clown’s Hear Your Colors, Lie, Lost without You. Of course most of the duo-raps that they did together, they sang. I’m telling you, people missed a very good show! I would pay lots more to SIT and listen to them again! No doubt! Even when we left a little after 10pm, they were still going but I’m sure it was winding down. Here are some video clips that I took. Excuse the crapping camera job! I must get a better cell phone!!!

Nothing but good times!! Cannot wait for the next concert! See you there!