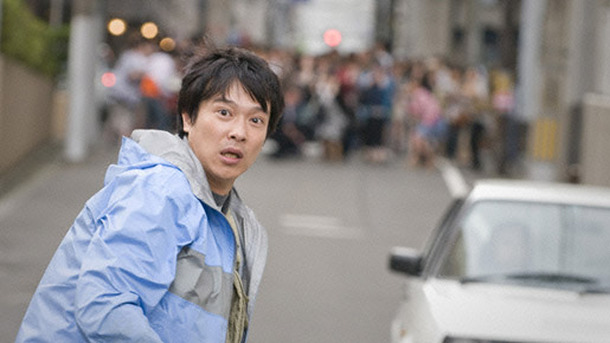 Synopsis:
Japanese version: In Yoshihiro Nakamura’s seriocomic thriller, when easy-going Aoyagi meets an old friend for a fishing trip, he ends up drugged, framed for the Prime Minister’s assassination, and on the run from corrupt cops. It’s only the beginning of what quickly becomes the worst, weirdest day of his life. But he’ll get by with a little help from his friends, who include a famous pop diva, a rockabilly deliveryman, a crippled old gangster,and the world’s most cheerful serial killer.

Korean version: Gun Woo is an ordinary parcel delivery man who is involved in a conspiracy by a powerful man and is accused of assassinating a presidential candidate. As a result of the assassination and conspiracy, Gun Won, a deliveryman has to flee for his life when he is framed and the evidence against him begins to accumulate.

Musings: The problem with remakes is when the new diverges too much from the original; however, for once I must admit that I liked and understood the Korean version a little more. Acting in both for the main characters Sakai Masato (Masaharu Aoyagi) and Kang Dong Won (Gun Woo) were pretty good, I would have to give the acting edge to Sakai in this category. His portayal of Aoyagi required a lot more acting and less action compared to the Korean version. Another big difference in the movies is that the Japanese one had some comedic moments while the Korean was simply a thriller though and through.

Another big difference in the movies was the portrayal of the lead females. While Takeuchi Yuko (Haruko Higuchi) had a more prominent role as the college sweetheart, now married with a daughter. She plays a very large role in Aoyagi’s escape. Now contrast that with Han Hyo Joo (Sun Yeong); her role was more window dressing for me and not as prominent and remained a semi-love interest for Gun Woo.

Another difference in the stories was mainly because of the changes over time. In the J-version, most of the tracking done by the evildoers was mostly by tracing Aoyagi’s cell phone and occasional view on CCTV; while Gun Woo had to totally go underground because of the extensive tracking they were doing using CCTV on the streets, in buildings, just everywhere.

In both the J-version and K-version, help came in unsuspecting and strange characters played by Hamada Gaku (Kill-O) and Kim Eui Sung (Mr Min). Both men seemed to know the man who was framing the lead; however, neither a reason or clear explanation was given why they knew the service agent/police involved. As you can expect with the K-version being more of a thriller, the violence level was also higher. Lots of car chases, physical violence and maybe a little bit more choice language.

When it comes it the ending, I like the K-version more. The ending was exciting and climatic; I understood it more. The J-version left me wanting more to happen and you were left to make assumptions about the ending. Sure, there were clues but I guess I just want to know! Overall, both movies are worth watching and are so different at times, you forget that you are watching a remake.