I’ve pretty much have done a post for what I want to watch since last winter season, 2016. It never fails that I’m always disappointed at the number of dramas on my list I DON’T get to watch. I think this season will be full of disappointments also. There are some I would be surprised if they aren’t subbed (Crisis and Boku, Unmei no Hito desu) and some that I kind of want to watch even more (Hokuto and Bouncer); however, here is my official wish list for Spring 2017. Not that long as there really isn’t a lot I want to watch but these definitely bubble to the top of my must-see list.

Episodes: 5
Genre: Crime, Thriller, Psychological, Investigative,
Synopsis
20-year-old Hokuto is being detained as a murderer and tells his court-appointed lawyer Takai Soichi to get him the death penalty. Hokuto was actually severely abused by his parents in his childhood and starved of love. He met Kondo Ayako who became his foster mother through child welfare services and learned love for the first time. Released from the darkness of his mind, he started to feel like a new person but he is made sport by bizarre fate and becomes a murderer.
My Hopes
Another dark and dreary drama brought to us by my favorite network, WoWoW. This network’s thriller/crime dramas never fail to shock and amaze me. Nakayama Yuma, I’ve not seen him in anything so I cannot vouch for his acting. As he is an idol, we have a 50-50 chance of his acting being good and a 50-50 chance that one of the idol fan groups will pick this up! As it is only 5 episodes, there is some hope. Here’s hoping!

Episodes: TBD
Genre: Detective, Investigation
Synopsis
The Special Investigation Unit is a secret force of specialists in various fields. The unit is under the direct control of the head of the Tokyo Metropolitan Police Department’s Security Bureau. Its members include investigator Inami Akira who sustained serious trauma in a special mission during the time he was in the Self-Defence Forces; and Tamura Saburo who was ordered to transfer from the Public Security Department’s Foreign Affairs Division in the wake of some incident and was later picked out by the Special Investigation Unit. These men will find themselves confronting irregular cases that will shake up the country.
My Hopes
Two top actors and favorites of mine in one drama? I would be seriously SHOCKED if no one subs this. Considering Oguri Shun’s last drama, Daisho (dark as HELL) was only available on Hulu, I really hope this makes its way to either Hulu, Netflix, or our favorite streaming websites!!

Episodes: 10
Genre: Action, Life, Manga
Synopsis
Shishido Joichiro, a 19-year-old man whose frank honesty has cost him 26 part time jobs. One night, he runs into a group of muscular bodyguards who protect the streets at night, members of a private security firm known as “Tokyo Fist,” which ends up changing his life.
My Hopes
Be still my heart! The poster was enough to peak my interest!! This is also from a manga so the sky is the limit when it comes to the story line! Wait…did you see the poster? Enough said!!!

Stars
Kamenashi Kazuya as Makoto Masaki
Kimura Fumino as Haruko Kogetsu
Yamashita Tomohisa as [Mysterious Man]
Ohkura Koji as Sekihara Tsuguru
Nanao as Yotsuya Mie
Sawabe Yu as Katsuragi Kazuo
hr>
Episodes: TBD
Genre: Romance
Synopsis
Makoto Masaki and Haruko Kogetsu are both 29 years old and single. Since they were children, they have passed each other at various places like on the beach and shrines. Yet, the two are not aware of each other at all. One day, a man appears in front of Makoto Masaki and introduces himself as God. He tells Makoto Masaki about his destined soul mate and that she works next door. When he faces Haruko Kogetsu, he tells her “I’m your destiny.”
My Hopes
This will be the romance for the season! Wait! This may be the drama for the year! A reunion of Yamapi and Kame once more? Oh to remember the days of Nobuto No Produce, my first HS drama love!! I think there will be so many English subber clamoring to do this drama, we will get subs within days! I’m betting on this! Plus, add to it a wonderful female cast of not only Kimura Fumino (Siren, Seirei No Moribito, A LIFE) but also Nanao ( a mini A LIFE reunion and Siren)!! There is so much to choose from to be excited about! Me? I’m SUPER excited!!

Stars
Sawajiri Erika as Kashiwazaki Yui
Koike Eiko as Kadokura Asako
Itaya Yuka as Nishihara Risako
hr>
Episodes: TBD
Genre: Crime, Drama, Family, Mystery, Suspense
Synopsis
One spring, when Kashiwazaki Yui and her 3 years old son were coming back home from kindergarten, she let go of her son’s hand for a moment and then he was gone. 9 years later, her son appears in front of her again. It is through this family that suffered a kidnapping, three women learn what it takes to become a mother amidst the struggles and pain.
My Hopes
My hopes is that someone picks this up. This will be an intense and tearful struggle to watch this drama as it unfolds. We have great leads in all three leading ladies. I’m a big fan of Sawajiri Erika since Taiyou no Uta (sorry, I’ve purposely skipped 1 litre of Tears) and Koike Eiko (Sekai Ichi Muzukashii Koi, Massan ) always brings a great performance as well as Itaya Yuka (First Class, another reunion, Doctor’s Affairs). The likelihood of this one is slim but I’m hoping some Erika fan will pick it up!

Episodes: 6
Genre: Crime, Drama
Synopsis
Takeshima Ryota has followed in his father’s footsteps and now works as a prison officer at Kitakanto Prison. He has witnessed corrupt prison officers who tolerate bullying and gambling. Nakui Soichi then becomes the newly appointed prison chief. Soichi gives an order to Ryota, informing him that he will get rid of prison corruption.
My Hopes
I’ve not dashed my hopes on this one yet. It started this week but it stars Kubota Masataka (Death Note, Last Cop, High & Low). Who doesn’t love him? As the Winter 2017 season winds down, I’m wishing this gets picked up next. 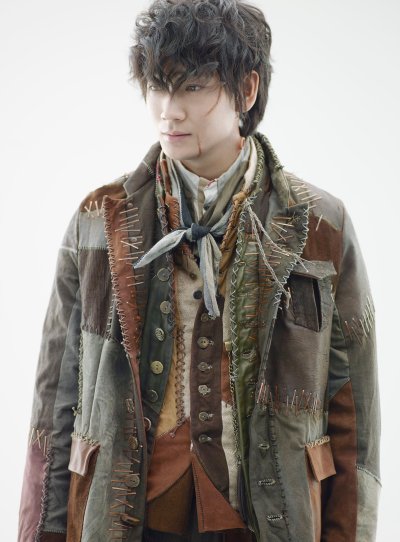 This one is a late addition! I just heard about it recently. It’s Ayano Go! Look at that picture!! Frankstein falls in love?!! I’m in!!