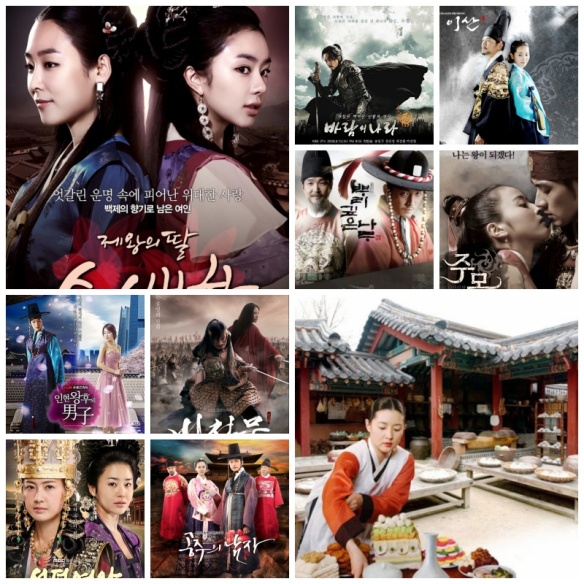 I’ve had this quick post sitting in my draft list for awhile. I thought of combining all Asian dramas but then it would have been harder to come up with just 10. So, to make life easier, I’ll split the posts. Here are my top 10 favorite Korean period dramas (so far).
10

Yi San
This was a 77 episode drama that starred one of my favorite actors, Lee Seo Jin as King Jeong Jo and Han Ji Min as Sung Song Yeon. The story wasn’t heavily romantic but the interaction of the leads and the romantic build-up made one aspect of the drama interesting. I enjoyed it even though it took too long time to watch!
Rating:8/10

Queen In Hyun’s Man
Granted, this is not a true period drama but as a fantasy and time-travel one, it represents one of the best in two fronts: romance and story. When this drama was first released, so few people were even watching it; however, as us die hard fans started raving about it, more and more people began to watch it and it slowly became a favorite for a lot of drama watchers. As far as romance? One of the best but then the leads actually started dating for a while so that accounted for the realism, I guess. If you haven’t watched this on, I recommend it.
Rating:8.5/10

Queen Seon Duk
This drama is one of my favorites as it represented women as fierce characters that were a force to be reckoned with. It also starred one of my favorite actresses, Lee Yo Won as Queen Seon Duk and introduced me to Go Hyun Jung as Lady Mi Shil. In addition, the somewhat evil and crazy Kim Nam Gil as Bi Dam literally stole the show and totally made you forget that UhmForce aka Uhm Tae Woong as Kim Yu Shin was even in the drama. Again, not a short drama with 62 episodes; however, I enjoyed every single moment and would watch it again! Wait. I even have clips saved! A true sign of my enjoyment!
Rating:8.5/10

Bicheonmu
This drama was one that I came across while searching for something else. I had never heard of it nor was it ever recommended to me; however, the handsome Joo Jin Mo as Yoo Jin Ha was a treat! Add to it a strong supporting from Kim Kang Woo as Shi jun was just handsome overload. The romance in this drama was okay but not my main motivation. There are just so many things to talk about in this drama but the feels, emotions and all the handsome men makes this 14 episode drama really worth watching! The action alone is worthy!
Rating:8.5/10

A Tree with Deep Roots
The amazing thing about this drama was the acting of not only the leads but their younger counterparts. Chae Sang Woo as the younger Ddol Bok/Kang Chae Yoon was simply sensational and sadly I don’t think I’ve seen him in anything since! But when it came to the adult cast, Jang Hyuk at his best! Han Seok Kyu was impressive as King Se Jong! Hell, even Shin Se Kyung as So Yi/Dam was semi-watchable! Jang Hyuk brought me in but I added many actors to my must-watch list after this. Really a great drama! If you watch historical/period dramas, you must watch this one!
Rating:8.5/10

The Princess’ Man
As I usually avoid romances like the plague, this drama is definitely one of my favorites in that category! It made me a HUGE fan of both Park Shi Hoo who played Kim Seung Yoo brilliantly, as well as Song Jong Ho as Shin Myun! This was my second introduction to Moon Chae Won who played the strong and courageous Lee Se Ryung without skipping a beat! As I hate love triangles, this was one of those dramas that minimized that tired and wore out drama trope but gave us a woman who was so in love with her man that she was willing (and did) to do just about anything to save him, love him and be with him. This is just a great drama through and through. When I first watched this drama more than 4 years ago, I had a hard time getting interested in other dramas afterwards because I was so affected by the great writing and acting. It would be a long time before I watched another period drama that I felt had great chemistry between the leads and a wonderfully orchestrated romance.
Rating:9.5/10

Jumong
To date, Jumong represents the longest period drama that I’ve watched as well as marathoned. During a Christmas holiday break, I watched the entire drama in 11 straight days! And lived to tell about it! As you can imagine, with the King of Saguek, Song Il Gook as Ju Mong, you couldn’t go wrong. The funny thing about this drama is his first love interest, I cared nothing for at all! As a matter of fact, Han Hye Jin as Soh Seo No, just never grew on me at all. It was Ju Mong’s true wife, played stoically by Song Ji Hyo as Ye So Ya that held my heart and love! Another thing about this drama that remains true is that the introduction of Ju Mong’s son Yu RI played wonderfully by Ahn Yong Joon, really saved me from boredom towards the end of the drama! What a wonderful character he was. I could have watched another 10 episodes featuring just him!
Rating:9.5/10

The Kingdom Of The Winds
Again, another drama featuring the King of Saguek, Song Il Gook as Ju Mong’s grandson, Mu Hyeol was another brilliantly orchestrated drama! As a matter of fact, I liked it even more than Jumong and it didn’t have anything to do with the fact that it was only 36 episodes. There was so much brilliant acting from Jeong Jin Yeong as King Yu Ri, Park Gun Hyung as Do Jin, Jang Tae Sung as Ma Ro to Han Jin Hee as King Dae So. The list is seriously long! I always say I want to watch this again but I just haven’t gotten to it. But believe me when I say, I have plans to in the future and I cannot wait!
Rating:9.5/10

Jewel in the Palace
Jewel is a classic which represents one of the best early historical/period dramas I’ve seen but also the only Lee Young Ae drama that I’ve watched. Jewel was my introduction to Ji Jin Hee who played Min Jung Ho and Im Ho as King Jung Jong. You remember I said I hated love triangles, right? This was one of those rare occasions that I actually didn’t mind. The two men loved Seo Jang Geum in such a way to make their love’s unique and different. Though they had conflicts, they really weren’t heavy and were also bearable. I loved the story line and the romance was heavy but the writing was in such a way that you felt the love that Seo Jang Geum had for Min Jung Ho and her utter admiration for her king, Jung Jong. The formula for this story really worked for me and really is responsible for my love of historical/period dramas today!
Rating:9.5/10

Taking over Number one easily: The Daughter of the Emperor (King’s Daughter, Soo Baek Hyang)
I admit that I was totally obsessed with this drama when it came on. At the time of its airing, the only place to watch it was on Hulu and I was watching it daily! As soon as they released the subbed episode, I was there. Whether 3am in the morning or 10pm at night, I watched this drama enthusiastically!! I must have written 3-4 blog posts on this drama alone, I was so obsessed! The story, wonderful; romance, brilliant; chemistry, off the charts!! While everyone else was watching Empress Ki (I got bored in 6-8 episodes), I was fanatically watching this one! Originally, it was Seo Woo as Seol Hee and Jo Hyun Jae as Crown Prince Myung Nong that brought me into to watching this; however, it was Seo Hyun Jin as Seol Nan that captivated and captured my heart. In addition, Jun Tae Soo as Jin Moo is an actor is who sadly dismissed and ignored but was totally brilliant in this drama. As the second ever historical daily drama that I’ve watched (Gu Am Heo Joon is the first), this is a drama that I’ve literally (and religiously) re-watched almost yearly.
Rating:10/10