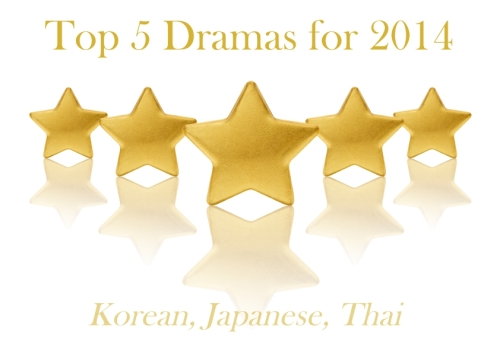 Once again, I present to you my top 5 pick of dramas for 2014. As you can see, for the first time, Korean drama didn’t dominate my picks. I found 2014 to be the year that I didn’t like the popular ones (more than likely if you suggest it, I didn’t like it) and the year that I discovered Thai Lakorn dramas whereby my first two ever were both what’s referred to as slap/kiss dramas. 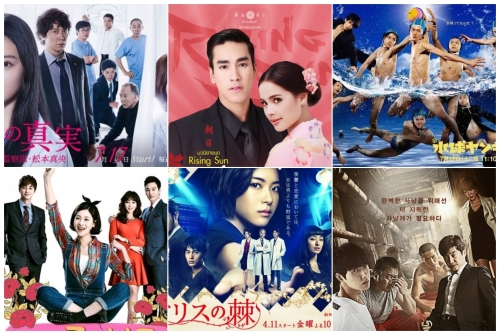 This year it was pretty easy picking the five (and one runner-up). I know my list looks nothing like yours but my taste generally runs away from Romance dramas but this year there is actually a couple I’ve noted. Again, they are not arranged in no particular order as I love them all equally. Compare it with your list for 2014: 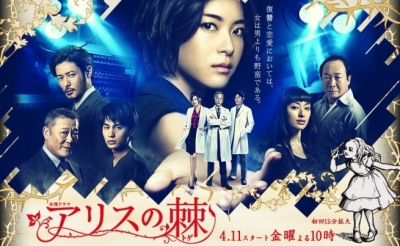 Stars: Ueno Juri as Mizuno Asumi, Kuriyama Chiaki as Hoshino Miwa, Nakamura Aoi as Bandai Yuma, Odagiri Joe as Nishikado Yusuke, and Kunimura Jun as Arima Tsuyoshi. As a medical drama junkie, I was immediately drawn to the premise of this drama. Who can resist a combination medical/revenge drama? Wait. I’ve never seen the combination before so that was the immediate draw for me. The possibilities of where the story line would go were endless. I was excited to see Ueno Juri ( I’m a BIG Nodame Cantabile fan) once again as well as seeing Odagiri Joe in a drama for the first time.

What this drama did well was keeping you guessing and guessing who was the mastermind. The minute you thought you had it all figured out, they would twist the story in such a way to make the last bad guy look like a choir boy. This went on for 3 antagonists until we reached the final one. As expected, the real evil one was the hardest to conquer. I know this drama wouldn’t attract most people. There was no romance but where there was no romance, there was mystery and a great resolution as well as one HECK of a story. I still get chills thinking about it! 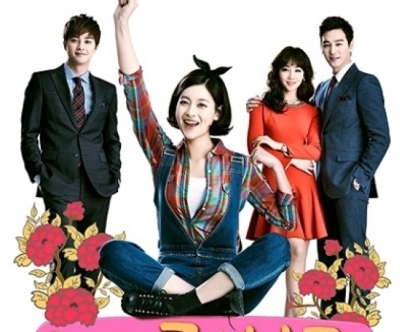 Stars: Oh Yeon Seo as Jang Bo Ri, Kim Ji Hoon as Lee Jae Hwa, Lee Yoo Ri as Yeon Min Jung, Oh Chang Seok as Lee Jae Hee, and Sung Hyuk as Moon Ji Sang. AWESOME! This is the best way to describe a 50+ episode drama that I watched over a long weekend, non-stop! I adored this drama! It was just a great story from beginning to end with a stellar cast!

The main OTP of Jang Bo Ri and Lee Jae Hwa were just “cuteness overload”! Another great thing about the drama was that it featured single motherhood which still remains stigmas in Korean society. I would be remiss in not mentioning the “Villainess of the Year”, Yeon Min Jung! Talk about hating a woman with a passion not only as an adult but even as a child! I felt so guilty hating the young Min Jung! But no one will forget our Moon Ji Sang. Our Moon was the only character who could thwart Min Jung and her evilness!! There is no question that the stars of this drama was Moon and Min Jung; hands down!! 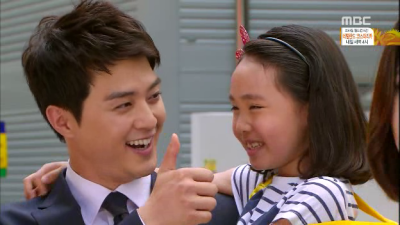 Lastly, I have to mention our little Do Bi Dan (played by Kim Ji Young). Bi Dan’s character was a force by herself and in many occasions overshadowed her adult actors in many, many scenes. Great drama! I highly recommend it to those not shy of watching a 50+ episode weekend drama. 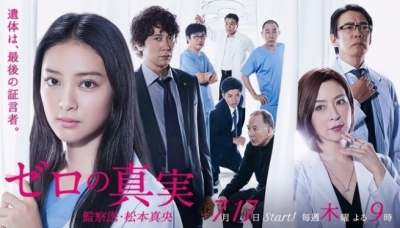 Stars: Takei Emi as Matsumoto Mao, Maya Miki as Inden Kyoko. This was definitely the year whereby I watched the most medical dramas; thank you Japanese writers! With my second love being medical dramas, I was pretty excited to watch my first drama about medical examiners. And this drama did not disappoint. 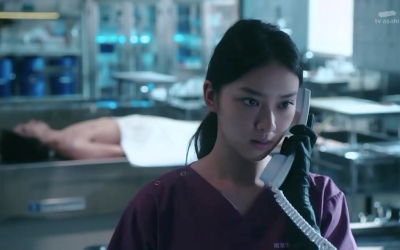 Takei Emi was actually a surprise for me in this role. She did an outstanding job as the super intelligent Mao. I think during the entire time that I watched this, I had “google” handy and ready with each medical term used. This drama also made me realize again why I love Japanese dramas. They never use a term without an explanation or diagram. I also feel thoroughly educated once I finished an episodes. The procedures were very realistic also. Many times, I had to turn my head or sing to myself when they would feature a autopsy procedure. This was also a medical drama that had a really good suspense story in the background. The time spent watching this was not only educational but enlightening. Squeamish, as usual, be forewarned. This is truly a medical drama at its best!

Stars: Kim Sang Joong as Oh Goo Tak, Park Hae Jin as Lee Jung Moon, Jo Dong Hyeok as Jung Tae Soo, Ma Dong Seok as Park Woong Cheol and Kang Ye Won as Yoo Mi Yeong. Cable dramas have been the best this year! I think I watch so many this year than in any year. But Bad Guys delivered in SPADES! Unlike some that started strong but fizzled at the end, this drama remained strong right until the last episode which gave us a hint of a season 2. No, they better have a season 2!

This was also that rare drama that almost all of the featured main actors were just phenomenal! From old salty dog, Goo Tak (as evil as he wanted to be in his own way) to Tae Soo who remained my favorite; all were just essential to the story. I also liked that everything was explained in this drama and nothing was left to out imagination or the hope of a season 2. I really did like this drama and I loved that it remained strong and faithful to the story right until the end. Only drawback was the Mi Yeong character. I thought she was so badly utilized that it would have been better if she had been left off the cast. Note to writer/director: if you are going to feature a female, how about making her as essential as the rest of the cast!

Stars: Nadech Kugimiya as Onizuka Ryu, Sperbund Urassaya as Takahachi Mayumi, Pichaya Golf as Officer Kobayashi Yuji, Sapunpohng Anuchit as Misawa Takao, Mint Tita as Junko, and Pimthong Washirakom as Akiko. This drama is the second one of The Rising Sun series and my favorite of the two. What is it about these two that I love and love and love? There hasn’t been a time when the chemistry between these two was bad! Of the two dramas in this series, I must say I really loved this one. When Ryu was on the scene, there was no doubt who would was in control. The costuming and scenery was breathtaking and the characters were memorable.

I liked the female lead of Mayumi She was a forced to be reckoned with and was raised to be self sufficient as well with the ability to defend herself and protect her future husband. At first, I worried that they would take the Mayumi/Yuji story too deep into love triangle territory but mercilessly we were spared that. I also loved how they infused the characters of Takeshi and Praedow (from the first drama) into this drama. It was nicely place as well as done. Again, I felt the action throughout this drama was the best as they featured martial arts, swordplay and just about every other weaponry imaginable. And what would the drama be without the crazy azz second female lead? I’m not sure I’ve ever watched a Thai lakorn WITHOUT one! Overall, a great drama to watch and with Nadech/Yaya to boot!

Stars: Nakajima Yuto as Inaba Naoya, Takaki Yuya as Kitajima Torao, Ohara Sakurako as Iwasaki Nagisa, Yamazaki Kento as Mifune Ryuuji, Chiba Yudai as Kimura Tomoki, Nakagawa Taishi as Shimura Kohei, Yoshizawa Ryo as Kato Shinsuke, Mamiya Shotaro as Chiaki Ryo, and Kurashina Kana as Hisashi Tsuyoshi. Okay, it wasn’t because we had all of these strapping young men in speedos! Oh no! I didn’t even know any of the actors in this drama! What attracted me was the story. I love sports movies! I rarely find good sports dramas and a High School drama to boot?! As usual, Japanese dramas come through. This was really a great drama as we watched these inexperience water polo players go from amateurs to being competitive against the best school in the town. I think I’ve watched water polo a couple of times as part of the Olympics. Not only was this a very good drama to watch, it was also a learning experience in which I learned a lot about the polo terms. I also appreciate the fact that these actors learned the sport in detail. No, there were no stand-ins, these young men were doing the stunts themselves. It makes you appreciate the drama that much more as you realize how much training and time they spent in preparing as well as filming this drama. It really was a great story! I enjoyed it enough to watch in less than 2 days!

What were your favorites for 2014?