As most of you know, I write movie reviews for KoreanDramaReviews website called Movie Mondays. Even though most of these will never be reviewed there (I try real hard to respect the younger audience there), here are some future movie releases I will be looking forward to.

Synopsis:A mobile omnibus short film based on Yoon Tae-ho’s original “Misaeng”. The Web toon protagonist has spent his whole life focused on baduk, the Korean word for the game Go, and never went to college. After getting a job at a trading company, he struggles to be recognized among his highly educated colleagues.

Loved Si Wan in Equator Man! I also like movies from web toons! I’ve seen a couple of them even though I’ve never actually seen the web toons; the stories are usually very interesting. Here’s the trailer: Misaeng

Images from the Upcoming Movie: 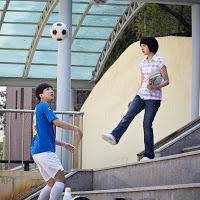 Synopsis: A series of murders resembling Ji-yoon’s horror webcomic drawings occur and Detective Ki-Chul unravels the rerrifying truth of the comics himself.

Lee Si Yeong combined with Uhm Ki Joon are enough to attract my attention!! I love both of these actors. I suspect there were be some serious thrilling moments and I will have to have my pillow handy (I know, amazing how I watch these type of movies)! Here is the trailer: Killer Toon

Synopsis: HA Yoon-ju becomes the newest member to a unit within the Korean Police Forces Special Crime Department that specializes in surveillance activities on high profile criminals. She teams up with HWANG Sang-Jun, the veteran leader of the unit, and tries to track down James who is the cold-hearted leader of an armed criminal organization.

Jung Woo-Sung as a bad guy is enough for me to want to watch! Watching him in Daisy as a hitman was very memorable and let’s not forget Padam Padam! I expect the same from this. Han Hyo-Joo, I liked in both Brilliant Legacy as well as the movie, Always. Here is the trailer: Cold Eyes

Synopsis: Sung-gong has always been a target for school bullies. One day, the bullies drag him to the home of a fellow high school girl named Jang-mi where they take turns raping her and forcing Sung-gong to do the same against his wish. Ten years later, Sunggong encounters Jang-mi again at a church, and thereafter he pursues his life seeking her forgiveness without confessing that he was one of offenders. But, when he realizes that Jang-mi is still traumatized, he seeks out the bullies again.
Running Time: 103min
Release date in South Korea : No realease date yet

Not a lot of information available on this right now but the plot sounds really interesting. It also falls into the thriller genre, one of my favorites!
Synopsis: Also known as a swimming term for holding one’s breath underwater, this movie is about two very different, restless youths who join a swimming competition for love and friendship which is, in fact, a rite of passage to growing up. (still in development)

With a cast of Seo In-Guk and Lee Jong Sun, that is enough for me to want to watch. I loved In-Guk in Can We Get Married? and Reply 1997. Jong Suk, I have only seen him in School 2013 (which I never finished) but still looking forward to seeing him in this. I especially like Sports themed movies.

Synopsis: Dong-chul was the best special field agent in North Korea, but he’s abandoned by his government during a mission. While on the run, he looks for his wife and child, who were sold as slaves to China, only to discover their corpses. He soon finds out that his colleague was behind the killing and defects to the South in search of his nemesis. Working as a temp driver at night and as a personal driver for Chairman PARK who is attacked and killed by an assassin. He is now on the run again, accused of the chairman’s murder.

Who can pass up a movie with Gong Yoo? I expect this to be filled with a lot of action and suspense as his character tries to clear his name and find the real killer of the chairman as well as find the killer responsible for his family’s death.

Synopsis: An intense drama of killing after killing in various groups of people. A fierce battle ensues; for each individual, it’s kill or be killed. (still in development)

Lee Min Ki as a killer? My excitement level for this movie sky-rocketed!! He is such a great actor and this is definitely a movie I will not be passing up. I am not really familiar with the rest of the cast but will be looking forward to seeing this (hopefully) next year! Look forward to the review here!!

As soon as I get more information, I will pass that on! So excited about this season of movies!